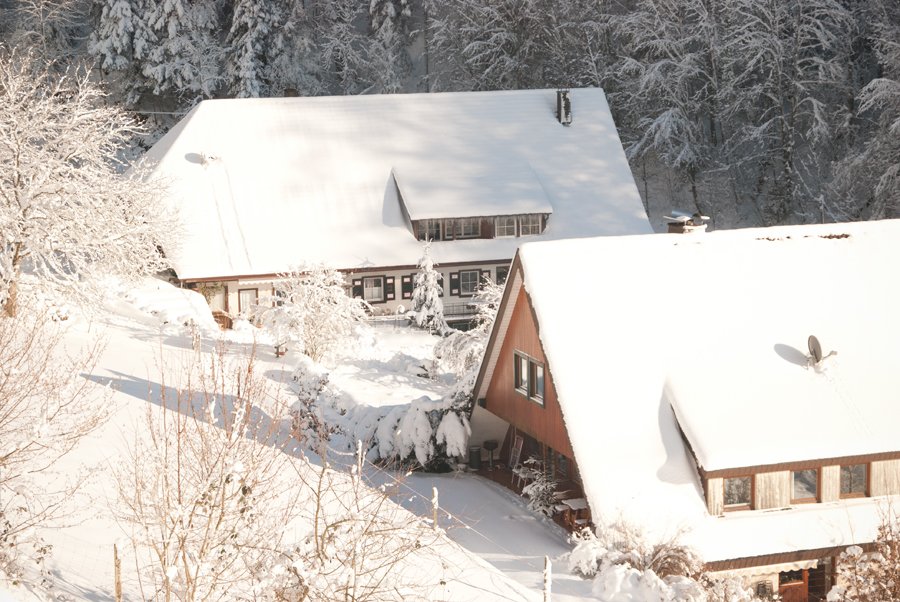 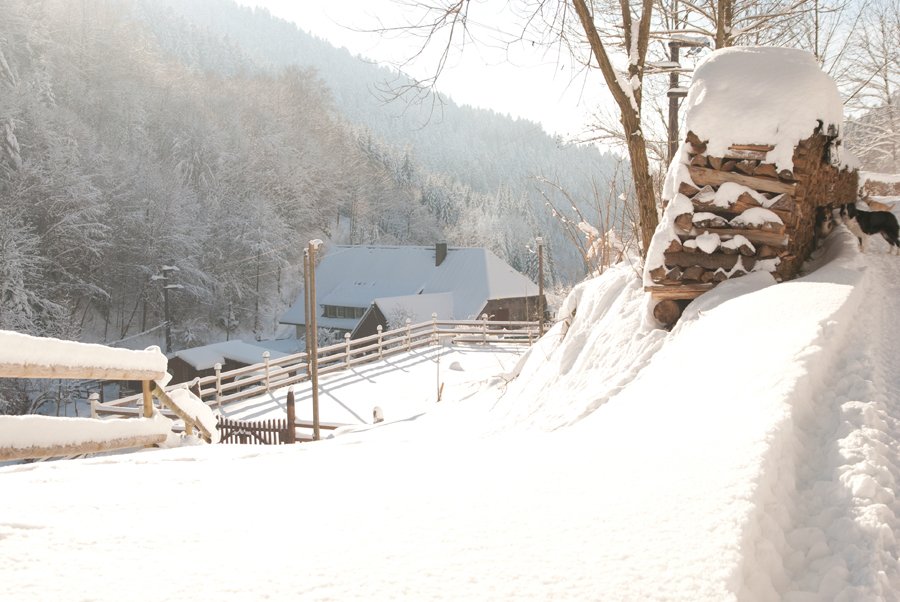 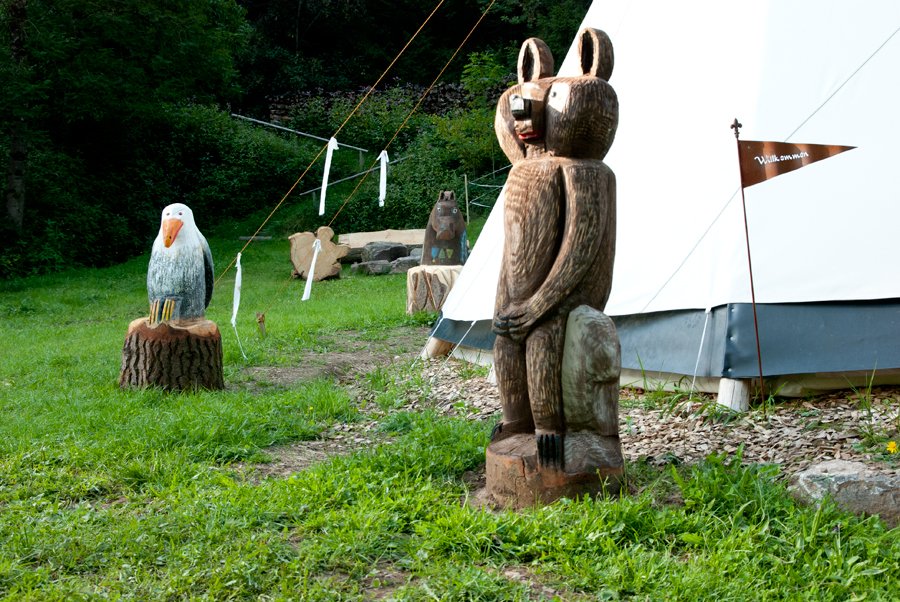 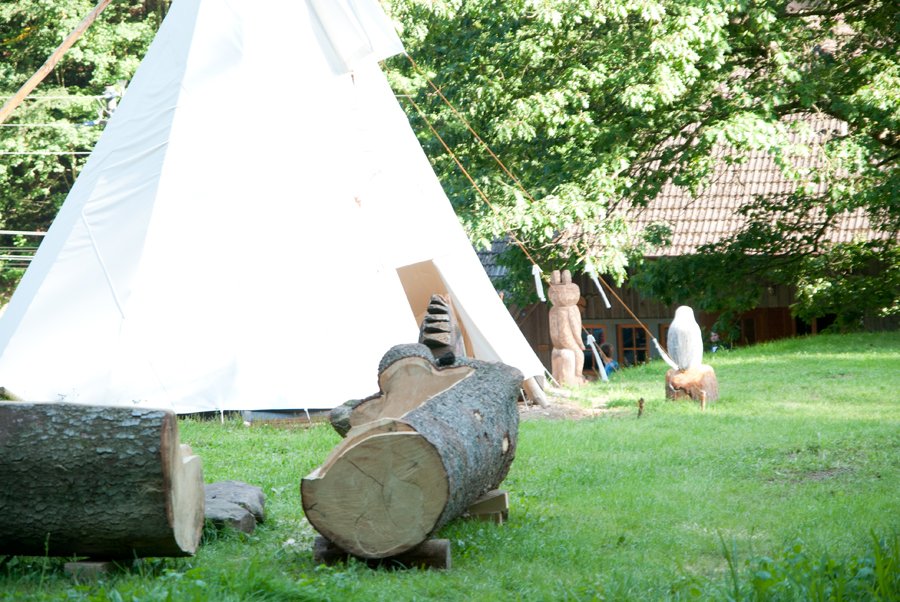 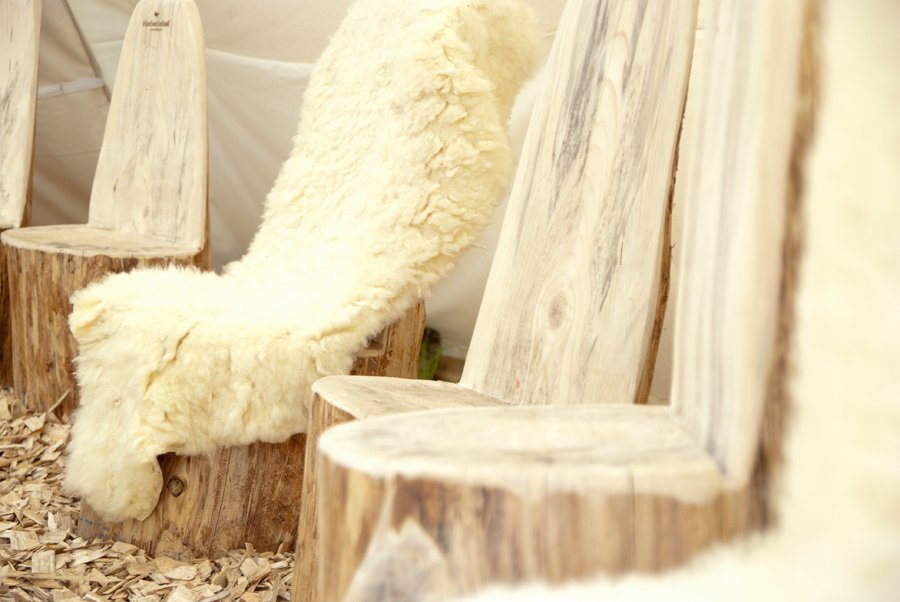 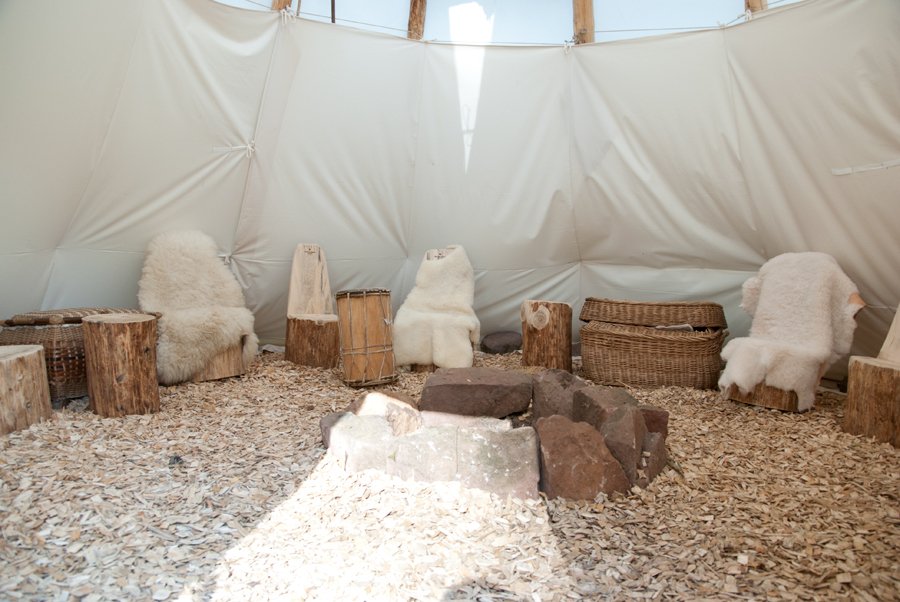 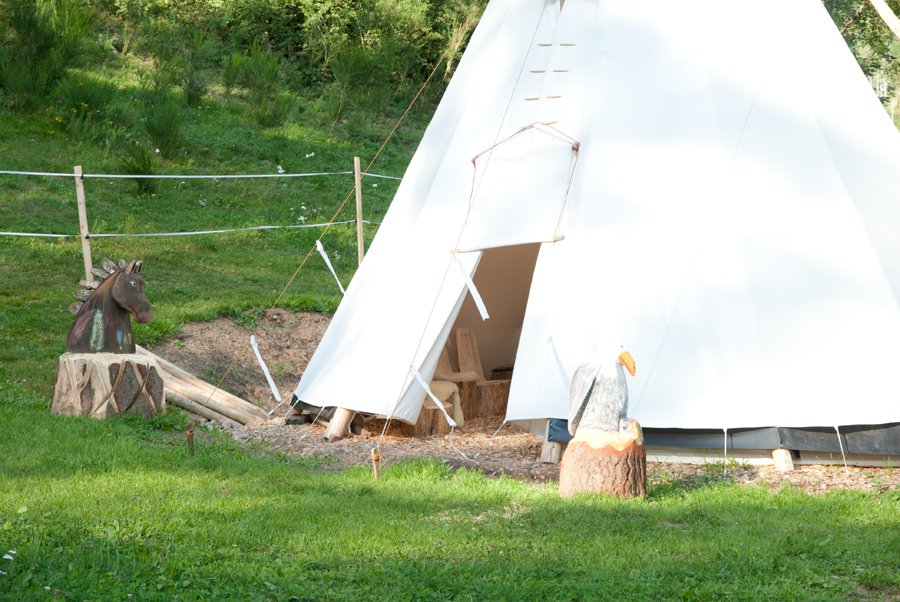 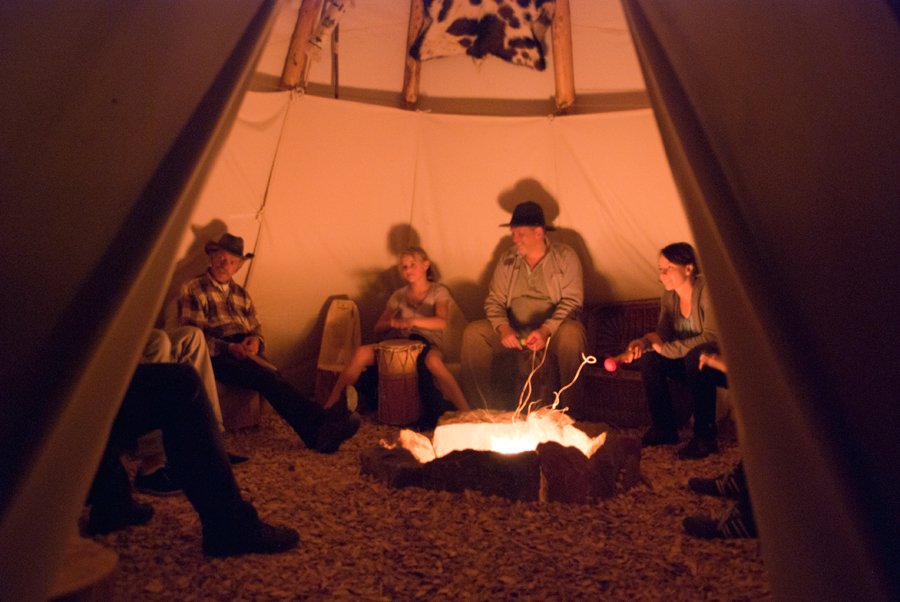 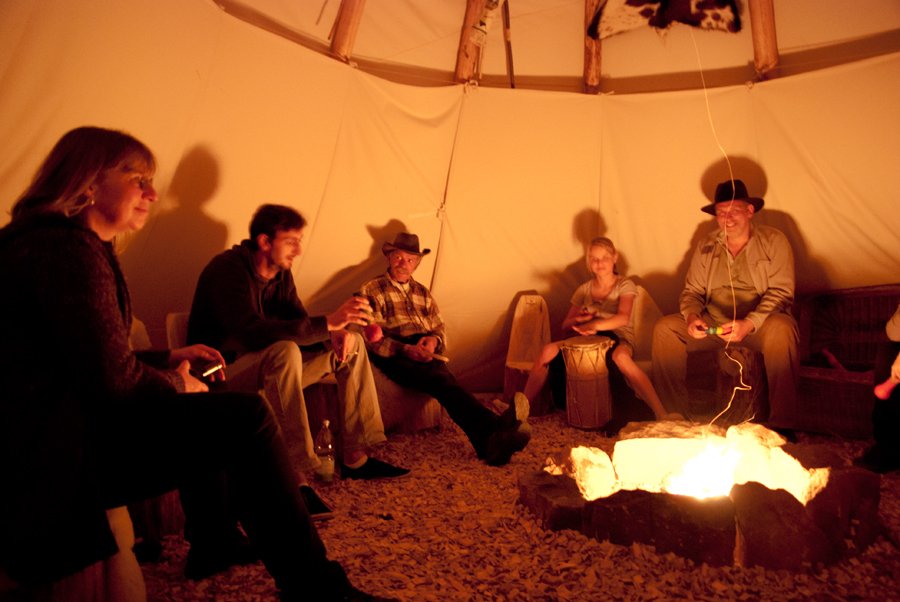 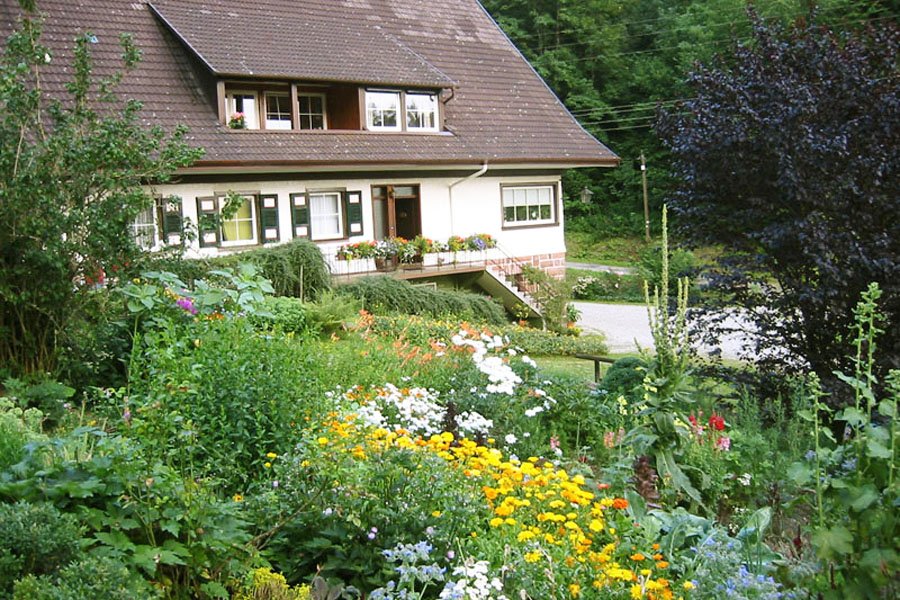 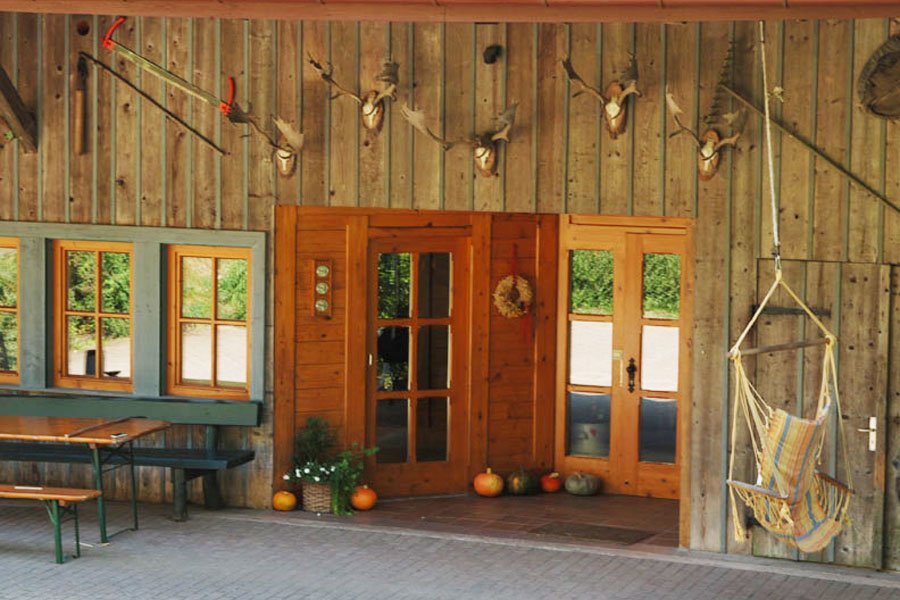 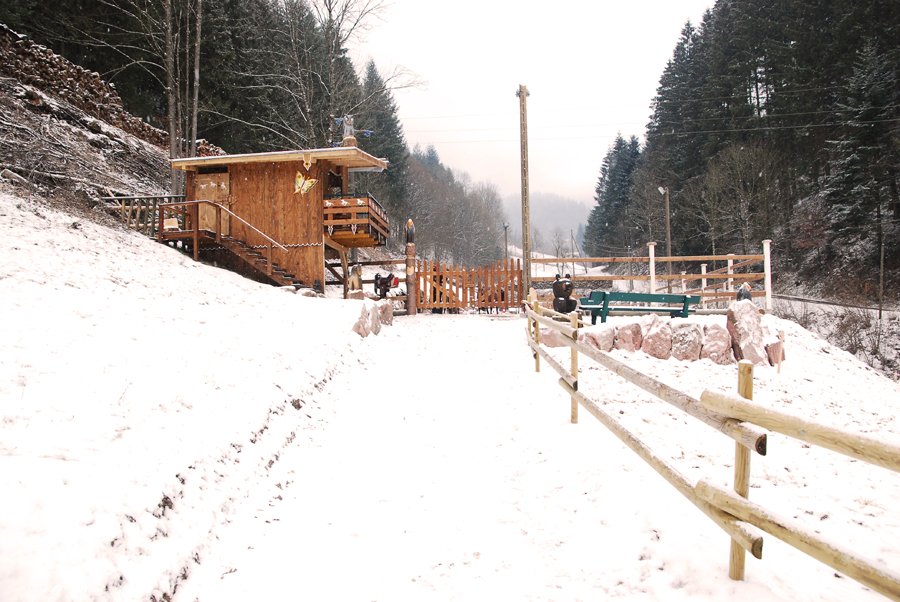 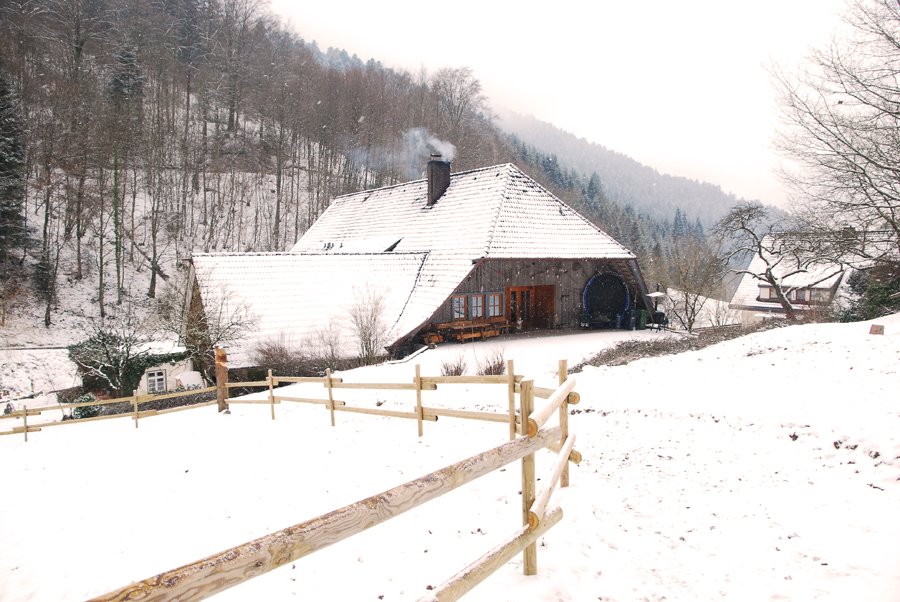 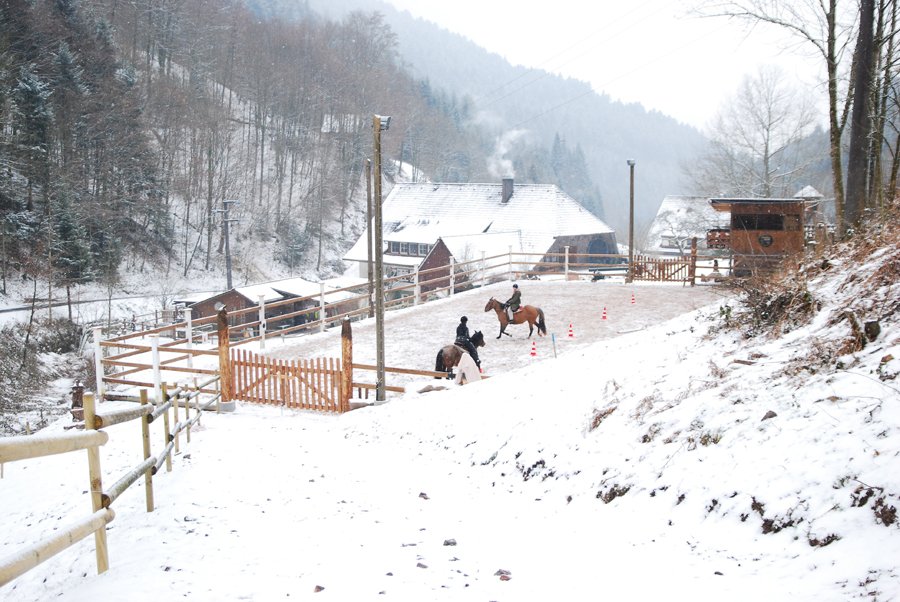 Plenty of room for human and animal 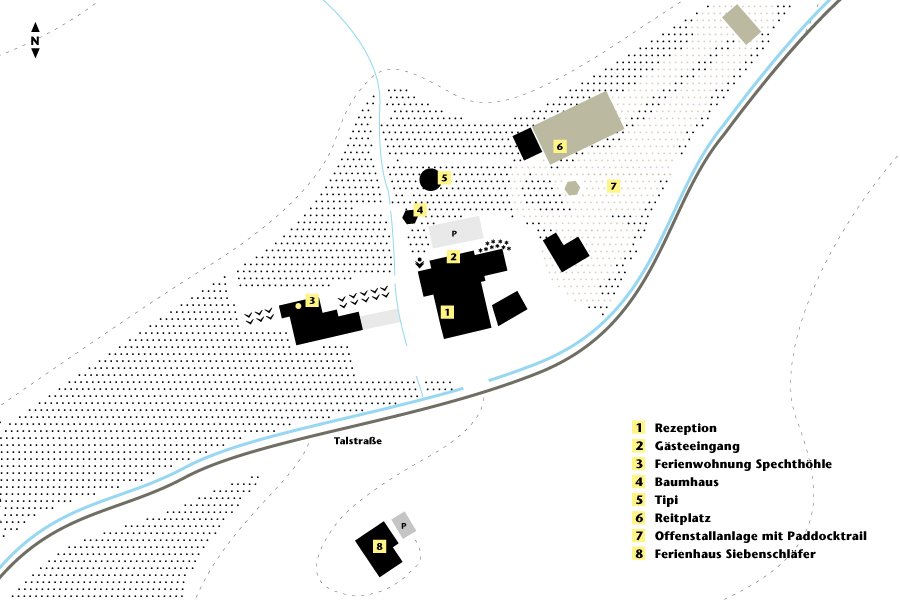 The farm offers ample space for our guests. In addition to the lawn above the main building you can find places throughout the farm to relax, enjoy a bbq, play or simply be together.

Alongside the many beautiful flowers, the farm garden provides a selection of seasonal vegetables and herbs. Ask Luitgard Fahrner if you would like to harvest a tasty summer salad from her garden!

We don’t have any through-traffic. The Langenbachtal is the end of the road! You are free to enjoy your holiday in a peaceful environment on a beautiful farm. 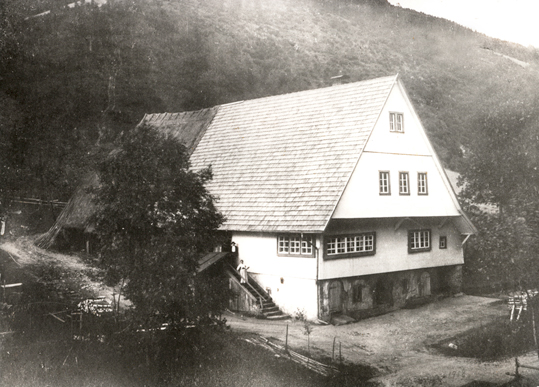 Records of the farm dating back to 1750 can be found at the Wolfach city archives. Older documents were destroyed in a fire during the 30.year war. At this time the site would have been farmed in extremely difficult conditions on the steep slopes of the Langenbachtal.

During the 2nd world war an engineer from Krupp built a hut on the edge of the forest for homeless people, 100m away from the farm (today the holiday cottage ‘Siebenschläfer’). Our grandfather passed away in 1948. Our grandmother Louise continued to manage the farm with her seven children.

The hut was allowed to stay after the war and was rented out as a retreat from the 1950s, at the time known as the ‘Sommerfrischler’ (‘summer refresher’). An additional holiday apartment was located in the main building. This was the beginning of the Horberlehof farm guesthouse, asagricultural activities ceased due to the extremely steep conditions.

In 1975, while a new heating system was being installed, the barns were converted into four holiday apartments (of between 30 and 40 square meters).

The farm was passed on to Alfred Schillinger in 1978 and in 1980 the old Leibgedinghaus was demolished and rebuilt to create two holiday apartments.

The ‘Sommerfrischler’ holiday hut was lovingly renovated in 1990 as a comfortable holiday house. In 1992 an additional living space was added to the existing holiday apartments in the main house. The Fahmer family moved into the Leibgedinghaus in the spring of 1997 and into the main house a year later, when the farm was officially handed over in July 1998.

The Horberlehof estate is responsible for an area of 73,1 hectares (of which only 3,1 hectors are designated as ‘green land’) and 69 hectares of forested land. Extensive renovations, both inside and outside, began in 1999, when we also published our first website, equipped the reception with a fax machine, computers and telephone connections and designed a new brochure.

The open cattle stable behind the main house was converted and redesigned for keeping horses. Dolly and Napoleon, our first two Haflinger horses, were able to move in at the end of October 1999. After the storm ‘Lothar’ in December 1999 it became clear that we needed to generate a larger proportion of our income from horse riding. Montana was born in 2002 and the French trotter Joker found a new home on the Horberlehof in 2003.

In 2004 the farm received 4 stars. In the following years we continued to expand and develop our range of activities. We built a beautiful new riding paddock and the open stables were extended with a riding trail. The Horberlehof evolved from being a source of accommodation, to a holiday and riding farm.

In 2013 the fallow deer enclosure made way to provide further pastures for what was now a stall of 12 horses and ponies. 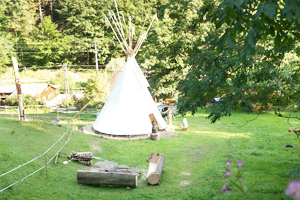 A traditional tipi was erected in 2012, offering young and old a place of fantasy. 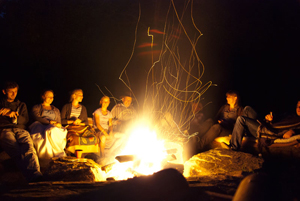 The open BBQ is the ideal place to end a Horberlehof day and make new friends. 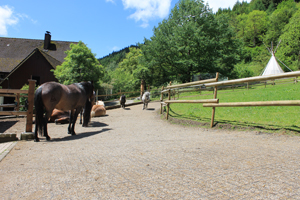 Over the course of many years (and with much love and enthusiasm), the former cowshed has become an oasis for horses and horse lovers. The open stable and adjacent pack dock trail provides the animals with a varied living environment, a place to play and an opportunity to interact with other horses.